French Bulldog Price | How much is a French bulldog ?

This soft and cuddly French dog is one of the most distinctive breeds of history, and this is the one reason that makes it a little pricey. However, the plethora of French dog owners has justified that it is worth the price. Yet, what makes it this much expensive other than this is still a question. So, to answer this query, we are here to help you out.

Before discussing the expenses as a whole, let’s talk about what this breed holds in it. This affectionate and lovely dog breed is a perfect partner for your daily walks and a friend that won’t ditch you in any way anytime.

Its adaptability and friendliness make it worth owning. It is even friendly enough with strangers so you can carry it anywhere without any worries. French Bulldog has a distinctive instinct to appeal to everyone out there despite being an oddly beautiful, big-eared, fluffy, broad, and powerful yet small in size dog breed.

It is one of the loving dogs who love to spend time with people and love to learn new things in a friendly way possible.

Once you choose it as your companion dog, it will become a constant presence or partner for you, making you fall in love every time you look at it. So, let’s discuss what is the French dog cost to all the expenses it can involve, like food, training, veterinary bills, care, and cleanliness, and many more to help you out in making a decision. 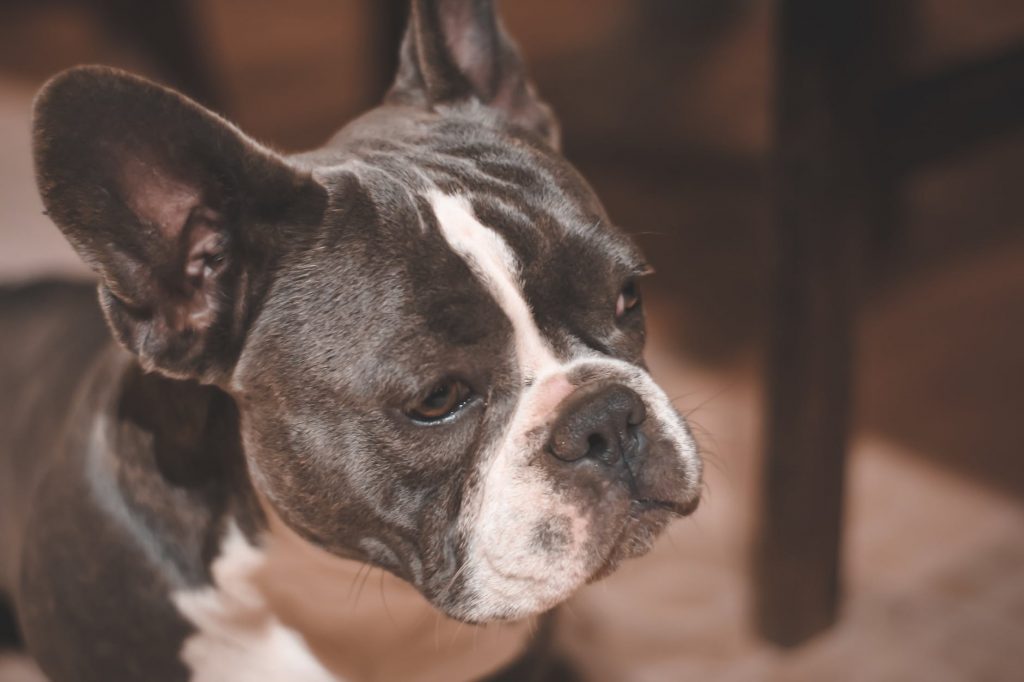 How much are French Bulldogs and how much does a French Dog cost altogether?

There are millions of French Bulldogs on various locations. Yet differ in colours, age and breed type. The initial prices of French Bulldog vary on multiple factors. Before buying it, you have to make sure whether you want a puppy or a grown-up dog.

While considering the whole life of a French Bulldog that lasts for almost 11 years, then the estimated amount can be nearly $16,295. It is important to note here that these mentioned amounts are an estimation of the overall expenses of a dog, including how much a French Bulldog cost, licensing, health, food, and grooming.

To highlight, a French Bulldog does not require a substantial amount of food, proper exercise to keep it active, or particular grooming. However, the veteran bills and health can add ons to your budget. Keep reading to get the insights into the detailed breakdown of the Frenchie prices that you should know before spending bugs on a French Bulldog.

Do the prices vary for different colors or sizes?

The prices of a French Bulldog vary with the colors, sizes, and also on a breed type. Mostly, the pure French breeds are expensive as compared to the mixed breeds Bulldogs because the pure breeders require a substantial investment for their care.

People usually prefer buying the youngest puppy because a 6-month puppy is relatively cheaper than an 8-weeks pup, and so on. And when the demand for a Bulldog starts depending on the color coats, then you know what happens.

The specific rare colored Bulldogs are more expensive than the common ones because of the increased market demand. The pure breed puppies of unique colors and color combinations hold the highest popularity as compared to the mixed breeds. 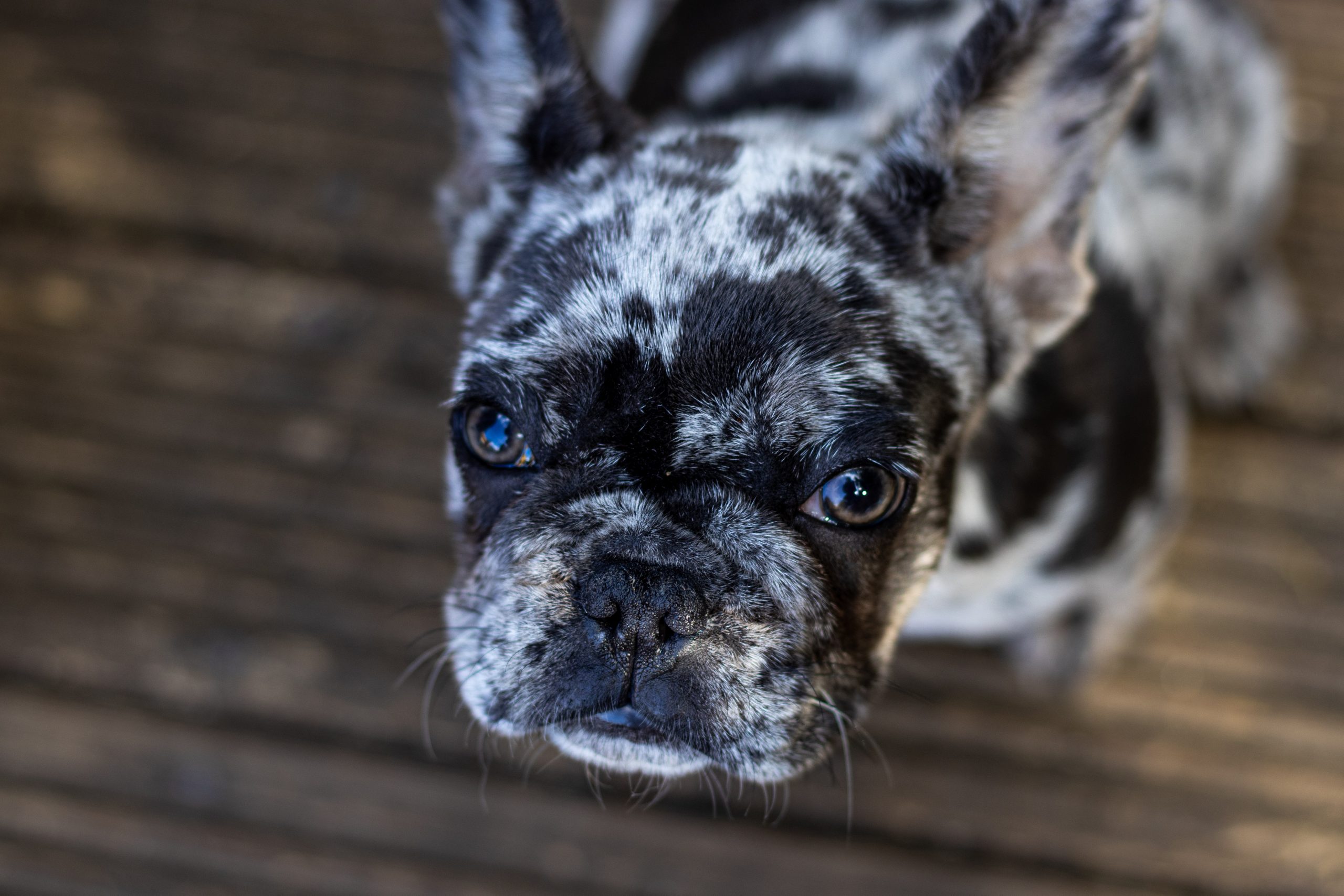 How much feed does a French dog cost per month?

Food is an essential requirement of any dog that you can’t even skip to save. Therefore, it needs proper research as to what food can overhaul your budget and what can be cost-friendly for you.

The plus point for a French Bulldog is that you don’t have to expend your expenses for feeding it. It hardly cost a bag of 30 to 40 pounds for two months. The Bulldog consumes approximately 1 ½  to 2 cups of food daily, depending on the age, build, and level of activity.

Even if you buy high-quality food for your dog, it will cost you nearly $2 to $3 per pound that makes $55 for 30 pounds, and vice versa. Your dog’s feed can cost you about $55 per few months.

The average cost can go around $75-130 to feed a puppy per year and $70-$225 for an adult dog. Yet, it depends on the amount of food consumption and treats. Apart from a regular meal, if you treat your dog on alternative days, then divide your amount by two and more.

Make sure that the feed expenses vary with the quality and quantity of food with which you treat your dog. The right food for your dog will let you add less food in your dog’s bowl but great nourishment per meal.

You can also make a personalized eating plan for your dog to calculate the estimated amount or buy the bulk amount and store it to save some money. 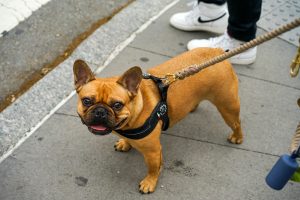 Why are the vet bills of a French dog considerably higher?

French Bulldogs are considerably prone to a plethora of health issues that contribute to the veteran bills on and off. Before diving into the most common health concerns of this French breed, keep in mind that the French Bulldogs have a shorter and flatter skull and a shorter nose on the flattened face genetically because of their relation to brachycephalic breeds of dog.

This characteristic feature of bulldogs makes them prone to breathing difficulty or the issues related to it. So, you have to make the shelter of your dog a cool place to live in to reduce the exposure to heat to avoid it.

Apart from this, several skin allergies, infections, eye deficiencies, or intervertebral disc disease are the most common health diseases of the French dogs for which you have to consult a doctor or even have to go for surgery.

The blue brindle French Bulldogs vet prices are higher just like the pure blue french bulldog initial price. It is solely because they are prone to Alopecia that is colour dilution. The veteran bills can range from $ 250  to $4000 depending on the onset, location, and seriousness of the disease.

Mostly the dogs can have the likelihood of these diseases for only 1 to 2 flare-ups per year, and you can also treat the breathing issues permanently if diagnosed and treated initially. So, the vet can save your money or can even haul your budget all over. It depends on the French dog.

How much the grooming and the essential supplies can cost a dog owner?

The grooming of a dog is most important, and you should be doing it frequently to ensure it. The plus point is the French dog is easy to maintain, train, and handle, and most dog owners prefer grooming and training their pet by themselves.

If you take care of your pet dog by yourself, it can save you nearly $240 in a year. You can do this at the time of training your dog. If you teach it to sit at the higher place, you will be able to offer it a bath, combing, and also keep in check its eyes, nails, and ears.

However, you have to be a little patient with this to save some bugs here too.

The total cost of the grooming supplies can range from nearly $345 on the initial investment if you buy the products like meal bowls, collars, bed, crate, Plastic Poop bags, shampoo, toys, toenail clippers, tooth-brushing kit, brush, and odor removal spray.

Yet, with each passing year, your pet dog starts learning everything, and it becomes easy to handle it. Eventually, the cost also decreases depending on the growth, the number of products you use, and the brands from where you buy the products. 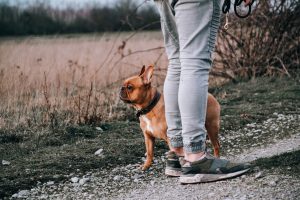 French Dogs are easy to train and handle, so it does not cost an owner much.

The training of the French Bulldog can cost you about $1050 – $1400 for both the private and group lessons if you hire a professional animal trainer.

However, you can also ease the whole process by learning how to train your pet dog by yourself from reading books or watching informative videos.

The private lessons include house manners, crate, and potty training, and group training involves the socialization in which the French Bulldogs have expertise. Your dog can be stubborn, but it is attentive and adaptive to several situations.

Why French Bulldog a little expensive but still preferable?

The adequately trained and groomed dog is a treat for the soul. However,  the French Bulldog is comparatively easy to handle and groom, but depending on the location and weather, the grooming can be difficult because of health concerns.

The essential requirements of the pet dog make it a little expensive, but it can be your lifetime friend and partner to walk and roam around wherever you go. It is the best of fluffy, cozy, ball-like dogs that can appeal to anyone with a single glance, making them buy instantly soon after they have an eye on it. 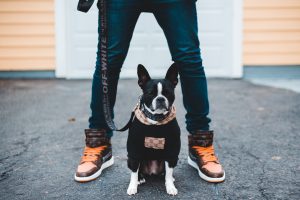 However, a pet dog should not be a financial burden. By acknowledging this, this guide can help you out in calculating the estimated expenses of a French Bulldog that is necessary before you buy a French Bulldog.

Read carefully, calculate it, balance the total cost according to your budget, and make sure that you will be able to provide your pet dog an environment to get a permanent trustworthy friend like no one. A French Bulldog needs a healthy and comfortable life to treat you with the ultimate peace that you desire. 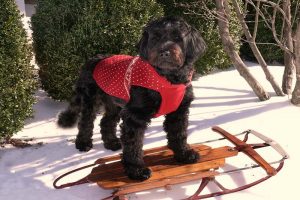 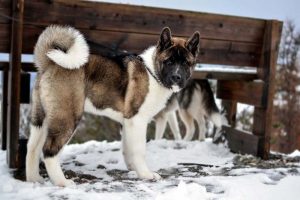 Akita Dog Price- How Much Are Akita Puppies? West Highland White Terrier Price -How much are westie puppies? Belgian Malinois Price – How much are belgian malinois puppies? Vizsla Price – How Much Are Vizsla Puppies? Dalmatian Price -How Much Do Dalmatian Puppies Cost? English Mastiff Price – How Much Are Mastiff Puppies? Greatt Brittany Price – How Much Does a Brittany Spaniel cost? Boxer Dog Price -How Much Are Boxer Puppies? 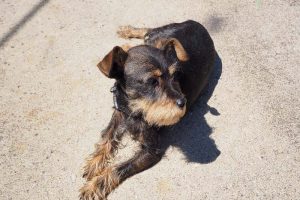 Labradoole Price -How Much Is A labradoodle ? English Cocker Spaniel Price -How much is an english cocker spaniel?

Puppycost.com is a participant in the Amazon Services LLC Associates Program, an affiliate advertising program designed to provide a means for sites to earn advertising fees by advertising and linking to Amazon.com.

Subscribe to keep up to date with top Breeder Dogs to buy online.

We won't rent or sell or spam your email. We promise!